I’ve found one of the best salves for the busy, stressed, or troubled soul is to get outside. Go for a hike. Plant a garden. Push your child on the swing. Read a book on the lawn. Snowshoe. Shovel snow. There are so many ways to get outside that doesn’t cost a penny and can be so soothing and restorative. I know I’ve written a lot lately about being stressed or worried, and it’s been true. There has been a lot of stress and worry in my life recently trying to get a small business operating while maintaining a welcoming home and raising a child the way I think that child should be raised. I certainly am an advocate for extending the hours of every day just so I can get things done! On the other hand, I’ve had to tell myself to pull back a bit lately and to get outside to enjoy life. And to enjoy the beautiful part of the country where I live. I am truly blessed to live in northwest Montana and there’s no point living here unless I get out and enjoy it!

A few weeks ago I went on a great walk with my friend Flannery. We explored an old homestead (now vacation rental), and enjoyed a wonderful walk through big meadows and beside still-white mountains. We watched a herd of elk move across the meadow and into the trees.

Those peaks never fail to amaze me. What beautiful mountains. Those white peaks in their imposing, monumental, wind-swept, snow-covered splendor. I run out of adjectives every time. I think there are just some things that language cannot describe. Some things are just meant to be gawked at, to be enjoyed on a primal level. To be connected to as a child of this planet connects to the earth.

Turning around from the mountains, you can see that this valley has experienced fire. Fire is good for forests. It rejuvenates the land, and did you know for many pine cones to germinate they need to be burned? Fire is part of the ecosystem here. It’s always painful to think about how might those burnt forests must have been, though, when all that remains is charred lodgepole trunks. Someday again, there will be forest. 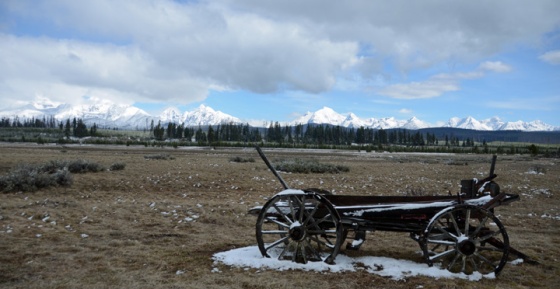 And even though this part of the world can be very remote, it is also touched by humanity. This was a homestead, many years ago. A family struggled to make a living here through winters harsh and howling, through summers bright and bountiful. Hard people making a hard way, but in one of the most magnificent places on the planet. That family still owns the property, by the way. The homestead has made way for a vacation rental now, but at least the place is still enjoyed and that view is still appreciated. I will always wish that the land were still worked, but that isn’t this piece of land’s destiny, at least not right now.

For now, this wagon will gather moss and make for pretty lawn art. The wheels will sink into ruts and eventually the earth will reclaim the wooden spokes and the iron rims. Everything in this life is eventually reclaimed, you know. The earth is one heck of a great recycler.

After our walk, we retired to Flannery’s rented summer cabin. Like all cabins in this part of the world, there’s no electricity save for generators. Heat comes from the wood stove which comes from the wood you chopped and split. Chopping wood is great fun, great exercise, and I can’t say enough about its virtues. Go chop some wood, people. 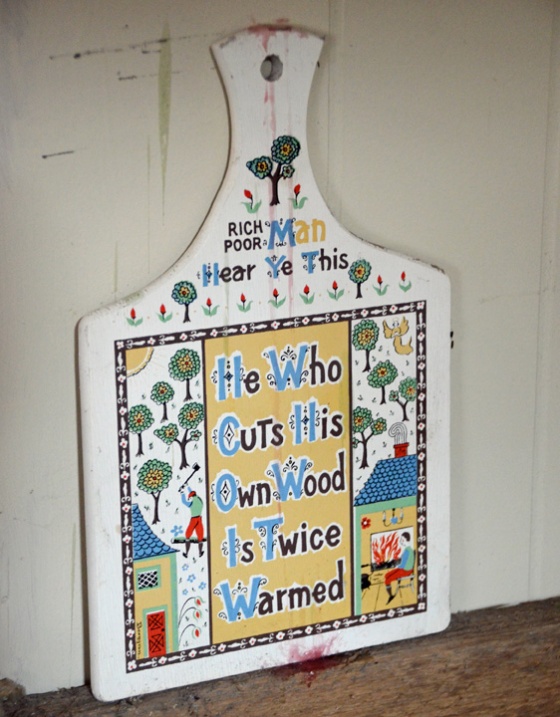 We were also warmed by some strong coffee spiked with whiskey and with excruciatingly rich chocolate cake Flannery baked. Flannery is a world-class baker, after all.

We followed our chocolate snack with some gypsy stew, bread, and wine for dinner, eaten by candlelight (because there’s no electricity, remember?).

While I obviously enjoy the perks of electricity, I do love getting away from it too. I think there’s something in all of us that yearns for the simplicity of a life lived close to the earth, and without distractions like television and Internet. Of course that simple life did lack things like coffee, easily procured beautiful yarn, and blogs. And I would greatly miss those things.

It’s about balance people. Do some soul balancing and get outside. There is a big, beautiful world out there for exploring. The Internet will be there when you get back, but the glaciers will be gone if you tarry too long at your computer screen.

It has been far too long since I last posted and no doubt my readers are wondering if this blog is dead. Good news, it isn’t! It’s just been a tad out of commission as I’ve been quite the traveler lately. But, never fear, a recounting of those travels is soon to come. More photos and tales of England, photos from the trip to California and photos, like the one above, of a visit from a friend (and her husband) who has been a friend for a very long time. Also to come is an update on the garden and other news.

I’m working on those blog posts now (they’re long, so they’re taking a lot of time), so please enjoy the above photo of the ever-photogenic Livingston Range in the North Fork of the Flathead snapped last week. 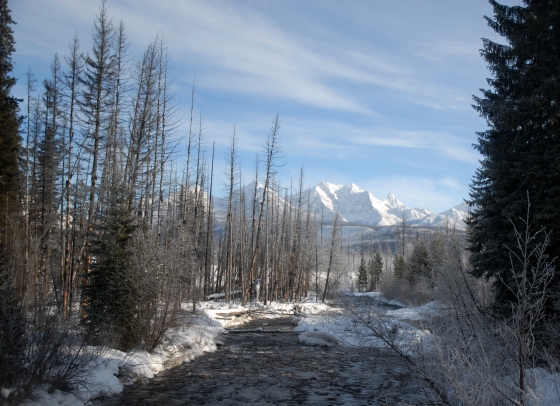 Drove up the North Fork with a local last week and enjoyed not only breath-taking views of snow-capped peaks in the Livingston Range, but also North Forker hospitality. Every house we stopped by had hosts falling over themselves to offer us tea, coffee and holiday goodies. Let’s just say I had to use the bathroom a lot after drinking many, many cups of tea. By the last house, Bonnie, our hostess, who knows a little something about North Forker hospitality, asked, “Can I offer you coffee or tea or are you coffee and tea-ed out?” We shared a good laugh over that.

The photo above was shot at Trail Creek.

From Heaven I fall, though from earth I begin.
No lady alive can show such a skin.
I’m bright as an angel, and light as a feather,
But heavy and dark, when you squeeze me together.
Though candor and truth in my aspect I bear,
Yet many poor creatures I help to insnare.
Though so much of Heaven appears in my make,
The foulest impressions I easily take.
My parent and I produce one another,
The mother the daughter, the daughter the mother.

And here’s an excerpt from a poem, because this is just amusing: From “A Severe Lack of Holiday Spirit” by Amy Gerstler.

… People hit
the sauce in a big way all winter.
Amidst blizzards they wrestle
unsuccessfully with the dark comedy
of their lives, laughter trapped
in their frigid gizzards. Meanwhile,
the mercury just plummets,
like a migrating duck blasted
out of the sky by some hunter
in a cap with fur earflaps.

It would appear I’ve got snow on the brain, wouldn’t it?

Yesterday, I hiked with a friend and sportswriter at a sister newspaper in the valley. We hiked the Huckleberry Lookout trail. The first mile is flat and wooded. We crossed a foot bridge suspended over a brook filled with glistening river stones. If there’s something I love about temporal presence, it’s the color of river stones. In water, they’re beautiful: rusty red, chocolate brown, aqua blue. Once dry, the stones are dull, boring. Sometimes it’s better to leave things be. Especially river stones.

After the first mile, the trail begins its ascent. It’s a solid climb until the crest of the Apgar range. More than once Dixie and I found ourselves panting for breath, paused in the shade of hospitable pine trees. A great workout, that hike. It’s 12 miles round-trip.

We met one other person on the hike, a man from east Texas. And boy, y’all, did he sound like he hailed from east Texas. I admire his bravery, though. I dare not hike alone in Glacier National Park for fear of the bears. Dixie and I saw bear scat, but no bears (we like it that way). We might of heard one, but whether it was footfalls in the bushes or just the wind, we’ll never know.

Before climbers can reach the lookout building, they must walk along the ridge of the mountain. Along the spine, the trees bend east, as is knelt in supplication toward the sunrise. It’s windy atop the peak. Downed logs are gnarled with the abuse from weather. Yet even in such precarious places, life remains. Moss grows on the old wood and wildflowers find refuge in the shadows of trees.

A recent college grad named Luke is this year’s fire lookout. He lives in the one-room building. His walls are windows. Gives new meaning to the phrase “a room with a view.” There was not a cloud in the sky Wednesday for as far as the eye could see. Just the blue dome, unreachable and so close.

While I’d part with my right arm for a view like Luke’s, unless I had Shawn to keep me company I’d probably go mad as a lookout. A person can stare all day into the landscape, surrounded by it and totally separate. The wind rustles in the walls of the lookout building. The silence without wind might be overwhelming. Luke said he doesn’t get lonely because 15 people or so come to the lookout every day. He’s got cell phone reception and Internet access. Friends and family visit. A train of pack mules comes to visit every few weeks bearing food. Still, in between the people, I think he has a lot of time alone with his thoughts. Sounded as though he likes it that way. Said he’s writing. Wouldn’t get specific, but he won’t be the first lookout to write a book.

“It’s amazing how much the same view can change every five minutes,” Luke said. “This place is very alive. It’s very dynamic.”

After spending 45 minutes or so on the summit, interviewing Luke and scarfing down our sandwiches, Dixie and I made the descent. The above is a shot from the lookout of the trail down the spine. On the right side of the frame, the North Fork of the Flathead River and the North Fork Road are visible.

The expansive view from the top of Huckleberry Mountain afforded a panorama of the Livingston Range, pictured above, which follows the North Fork river valley up to Canada, about 30 miles distant. Dixie and I could also see Flathead Lake, 50 miles south. So many acres of forest between us and everywhere else. Filled with birds, moose, elk, deer, bears and marmots.

I tell you this: if you need some perspective, climb a mountain. Sit on top for a while and just be. Then walk back down. You’ll feel better, I promise.

Going down was much easier. We munched on huckleberries (ssh! don’t tell!) and stretched out our strides. Cold beer awaited us at the end, which makes every hike even more worth it.

This is the story of a young writer, mother and small business owner trying simplify and live sustainably in northwestern Montana.

Because I’m a Bookworm

"To encourage someone along their path might be the most important thing we can do for each another. Everyday we are given thousands of chances to lighten someone else’s load, to create a smile where one didn’t exist a second ago. How could we choose anything else?” -Jenna Woginrich